If you’re someone who is just getting started with kayaking, it’s important that you take the time to learn how to store your kayak for winter. Winter storage is something many people miss out on and then when they go to pick their kayak back up for a kayak trip in the spring, they find out it doesn’t look or function the same.

Here are the main things you must know in order to store it properly.

Clean The Outer Side Thoroughly

The first thing you should be doing is making sure you wash the entire kayak down with a hose first. This will clean off any dirt, salt, or other substances that might have gotten onto it during the summer runs.

A typical garden hose will work perfectly for this – just be sure you are cleaning all sides as best as you can.

Once you’re finished cleaning the outside, then your next step is to also clean the inside out as well. Usually water will get into the kayak as you’re running the waves and if the salt sits there over winter it could weaken the boat.

Don’t forget to clean in and around the handles as well – every area needs to be washed with clean water.

Stand It At An Angle

After you’ve finished watering it down, then the next thing to do will be to stand it upright at an angle. This will allow all the water to run off it and then when you store it, if it happens to rain or snow (if you’re storing it outside), the water there will also run off it.

You never want to let water sit in your kayak and accumulate when you store it over the winter.

Finally, if you’re planning on storing it outside and the area you’re thinking about does get a fair amount of sunlight, then you should also cover it with some form of tarp or other material.

This will be important to protect it from UV rays, which can really damage your boat.

So keep these tips in mind to store your kayak over winter. If you do them immediately after you finish your last trip, then you know you will be able to pick your kayak up again next year in the similar condition you left it.

ROGER’S NEW PROJECT IS THE BUILDING OF A PYGMY MURRELET KAYAK FROM A KIT TO PUT TOGETHER.

I had forgotten that when you first coat or varnish a raw wood surface, you usually raise all the grain. Well, that’s just what the epoxy did, it raised all the grain. After some scraping with the cabinet scraper and some 150 grit paper, I was ready for glass. It wasn’t too bad. Some concerns at the stern, and I did use some clamps to secure the fabric initially. One thing I did at the stern you don’t want to do. I secured the flaps of glass at the stern with tape so they wouldn’t move. Having never worked with glass I didn’t realize just how much of a problem it is to get the tape off the glass. It was not pretty. Don’t do that.

It was really helpful to have my photographer, Anne, mixing epoxy for me during the glass installation. Saved much time and made it much easier. Next thing to do is to laminate the keel tape and apply the fill coats. Not much to photograph there. See you next week. 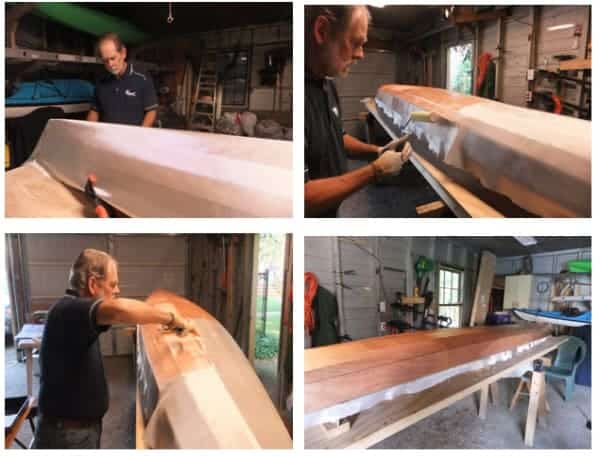 Laminated the keel tape and applied the two fill coats. Not that difficult although the 6 oz. tape takes a lot of epoxy to wet out properly. It has been quite warm here so I have been placing my epoxy and hardener into a sink of cold water prior to usage and it works very well. As the manual says, the tape does have quite a pronounced edge on one side. Also noted the overlap at the stern. I will see just how well they smooth out later. 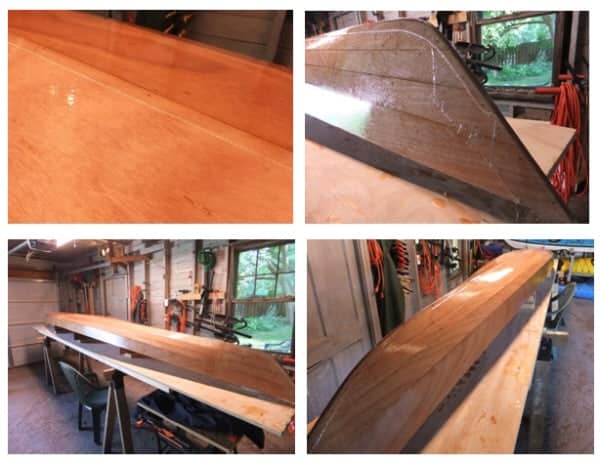 The overlap at the stern cleaned up good! Assembled the deck on the hull. This was exciting. I can finally see the kayak. I ran into something that the manual didn’t cover. It says to wire the fore and aft decks so the wire twists are on the outside, but it doesn’t say how. On the fore deck you can reach two of the three joints but when you add the other panel #5, you have a box with no opening! I solved it by releasing the tape from the bow so it could flex up and installing the wires just enough so I could bend over the ends. After all were installed, I pulled the wires up and was able to twist them snugly. The first application of epoxy is applied to the joints. Tomorrow if it’s cool enough I will apply thickened epoxy to smooth out the joints. 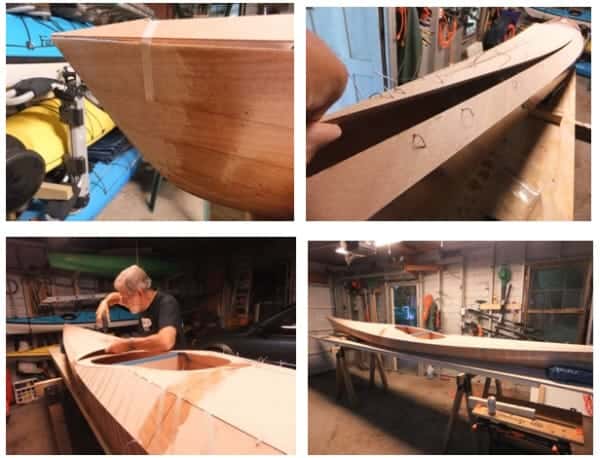 Mixed up some epoxy with wood flour to fill my seams. Not too bad. I did locate a potential problem. The manual states to cover the frames with tape and insert a piece of Mylar between the bow and stern so they don’t get glued to the hull. On the 4PD model there is one other area on each side where you must take precaution as well. The very narrow section of panel #5 is so close to the hull, if there is any gap between the panel and the cockpit lip (this is an area where it is difficult not to have a gap), there will be leakage. Epoxy will run down the inside and bond the panel to the hull on the inside. I was able to separate the two by carefully inserting a razor knife and tapping it with a hammer. It popped apart neatly.

Tomorrow is another 96 degree day so I will let the epoxy cure.

This Pygmy Murrelet Kayak is For Sale