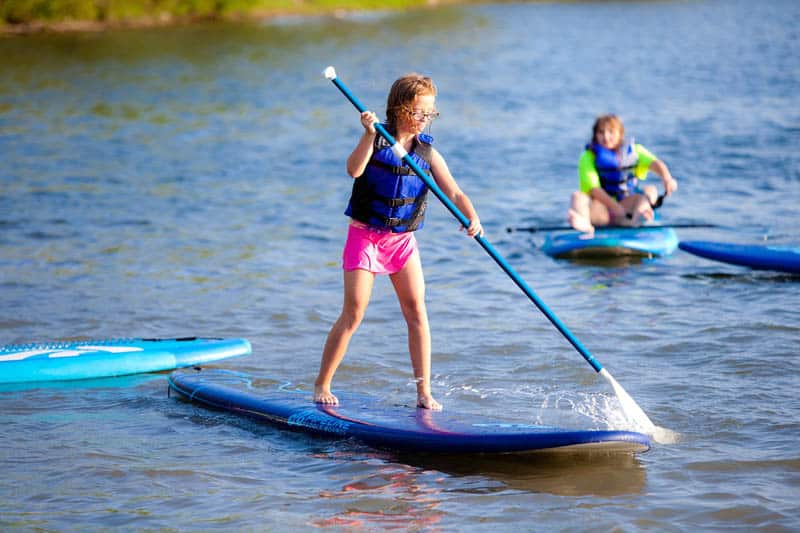 I was once like most of you, standing on shore, catching the sun, enjoying the beach; and off a distance beyond the break on the waves some hot-shot on a surfboard is standing up paddling!?! No wave, no surf, just standing there like it’s no big deal. In the back of my mind screams: how does he do that?!? I wear myself ragged just trying to catch a wave and stand up. This guy is stands up with no wave. He must have tight rope walking balance talent (I swear I didn’t mean to make that rhyme), or as it turns out, a really big board.

The rise in popularity of the SUP surfboard has created this experience to most people who ever visit the beach. It is also getting noticed on recreation lakes and rivers all over the country. And to you who sees the stand up paddle surfer, or stand up paddle boarder (as with no wave he really isn’t surfing) it is difficult to see yourself out there without flailing to remain in control like the want to be hot-shot on the mechanical bull after a few beers. Yet the truth is only as far away as approaching the guy as he comes to shore and asking.

You will find that the community of “SUPers” is the friendliest, most enthusiastic, and supportive community you can ever come across. From one stand up paddler to another that have never met, there is an instant connection. No rivalry or exclusiveness like among surfers for the best secret spot, stand up paddle is for everyone and has no limits that traditional surfing has. I would even go as far to say that SUP is more traditional due to its history. Yes, stand up paddle has been around longer that recreational wave surfing. It was a one of the major transportation methods used by the island dwellers going back centuries, but only recently has it become popularized into a sport and free market entrepreneurs pushed it onto waterways everywhere.

The easiest place to learn about this new sport off course is the web. It is easy to find stand up paddle guides, lessons, and how to videos. Rentals are fairly inexpensive and with the proper instruction you can venture out and back and stay completely dry from the knees up. If you are hesitant, but want to try it find a group on meetup.com. There really is no excuse for not trying it out any more. You have seen it, now do it!

Dustin B. has been a sup surfer since he first discovered the sport in 2006. He grew up snowboarding in the Rocky Mountains but living far from the world class snow of Utah he wanted to try surfing. His early attempts were met with frustration until he discovered stand up paddle surfing.

CNY Stand Up Paddle Board Rentals

Image by ambermb from Pixabay