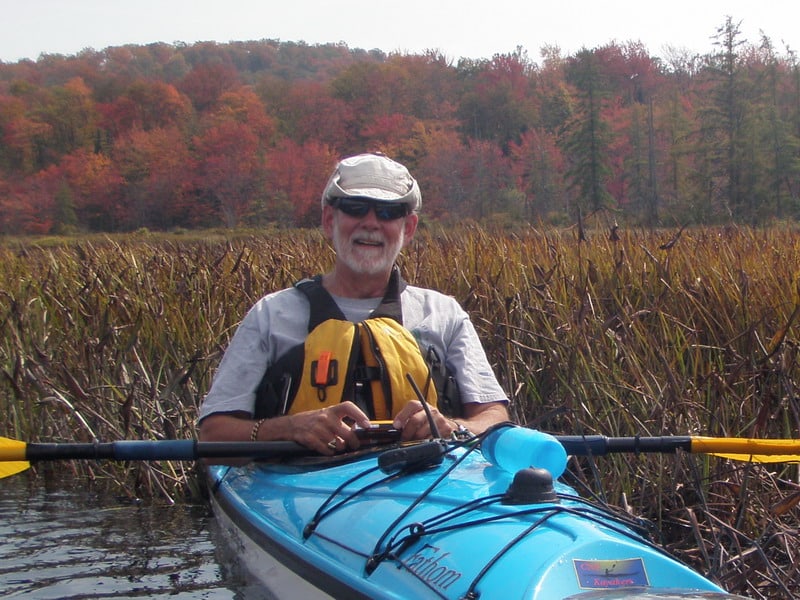 Kayaking in the fall can be one of the best times to be on the river or lake, but extra caution should be taken. In the fall the nights are cool and this cools the water and the days are short so the water does not have time to warm up.

When I paddle in the fall and spring I bring an extra set of close in a waterproof bag, and I always wear a P.F.D. just in case I get wet. Even if the water is not cold enough to cause hypothermia, it can make for uncomfortable trip if you happen to get wet.

That being said kayaking or canoeing in the fall can be one of the best times to be out on the water. The water levels are usually at a good level with the fall rains and the ground not taking in much water the rivers have a steady flow of water coming out of streams and field runoff.

You have many options when it comes to where to go kayaking in the fall in S.W.O. such as The Grand River, Big Creek (Long Point), Black Creek (Port Dover), some I have written about in other articles. In my opinion the best place for fall kayaking in S.W.O. is the Nith River.

The reasons I think this is the best place for fall kayaking in S.W.O. is because of it’s location, the water level, and the wind factor. The Niths’ central location makes it easy to get to. Starting in New Hamburg it is close to Kitcener and Waterloo. Passing through Ayr it is close to Cambridge, finally ending at the Grand River in Paris.

Even though there are some deep holes on the Nith, for the most part you are never in more than a foot or two of water.If for some reason you do end up in the water, you should be able to stand up and walk to shore. This is where that extra set of cloths come in.

Finally the wind factor. Many people do not think about the wind when they are heading out for a day on the water. On a river like the Grand that runs pretty much in a straight S.W. direction, and you get a head wind blowing up the river at you it can make for a very difficult trip.A few years ago while paddling on the Grand with some friends there was a woman with two small children in a canoe and it was very windy, and with no one to paddle in the front she was getting blown all over the river. She was having a very hard time keeping the canoe straight. Luckily a six man raft came by and two guys got in the canoe and the woman and kids got in the raft.

The Nith has a lot of high banks and a lot of twist and turn. Even on a windy day on the Nith you will only be in the wind until you get around the next bend. It is best if the wind is coming out of the west.

The Nith can be run any where between New Hamburg and Paris, the distance between most bridges is about two hours. A great section for novice paddlers is the bridge at Drumbo rd. (county rd 29), or the one just down stream on Blenheim rd down to the First or second bridge in Canning. The put out for the first bridge is on the left side just after the bridge, the second is on the right side about 100 ft. upstream from the bridge. Even the two bridges in Canning that are only one minute apart by vehicle, is almost an hour on the river. The bridge in Richwood (County rd 5) to the second bridge in Canning is about two hours. My wife likes this section because there are no big rapids, and it is pretty easy going, but there is still lots of nature to see.

My favorite section is from the down stream bridge in Canning to Optimist Park in the south end of Paris on the Grand River. Mostly because it is a real easy put in and put out (short carry to vehicle), it is a beautiful section of the river, and there are some nice rapids as you come into Paris. I will put my kayak skirt on for this section when the water is cold. It takes four to five hours to do this section. You can cut it in half by putting in at the Puttown rd bridge (lower downstream side). When you first get in at Canning the house you go past on the right just past the bridge is the Gretzky homestead where Walter Gretzky grew up. Wayne use to play on the frozen water of the Nith river when he was a boy visiting his Grandparents.

As you leave Canning that will be the last you see of houses for a few hours, and you get the feeling you are much further away from civilization than you are.If you don’t make a lot of noise you may even see deer, beaver or fox.My last trip down the Nith on Nov.14Th I had just got done taking a picture as I floated down the river, I was putting my camera in my pocket when I looked up to see a three point buck had just walked out down stream form me. I’m not sure if he saw me but he didn’t seem to care. I got a great picture and the deer just walked on out the other side and into the field.

As you come into Paris there are three sets of rapids that you should take care as you go through them. You may have to do some maneuvering to get through them, try not to get sideways. As you carry on down under the two foot bridges that cross over the river, it turns to the left and enters the Grand River below the Paris Dam, from here it is a short trip under the high level bridge to Optimist Park on the right side after the houses end.

Get To Know The Waters In Your Area In A Kayak